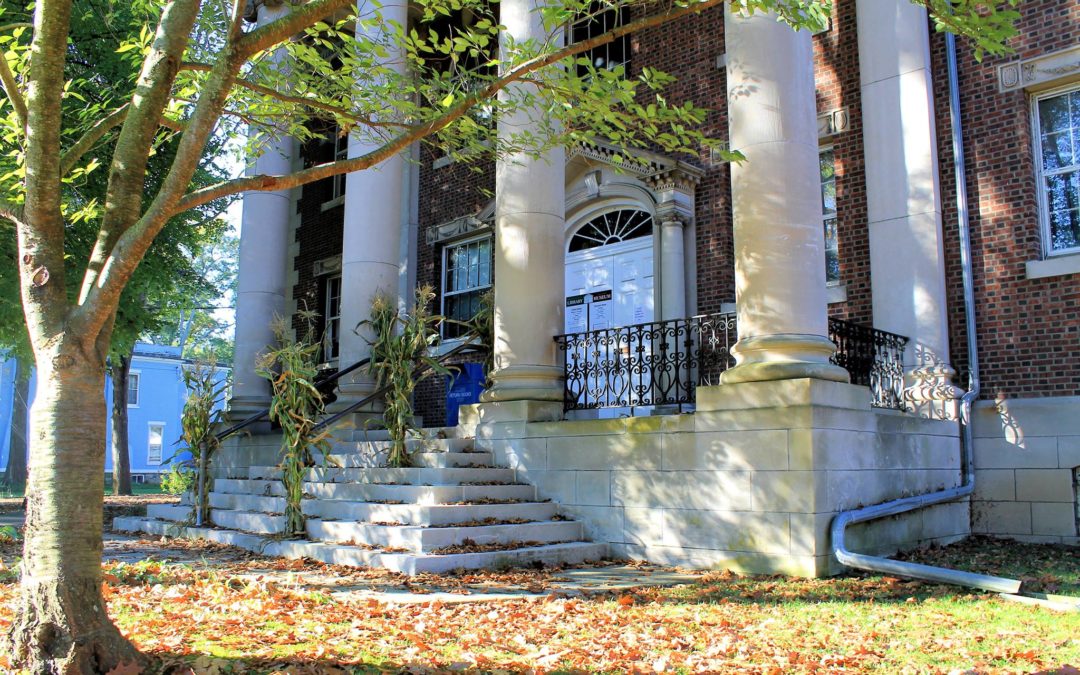 The original building was built in 1897 by Jesse Spalding in loving memory of his son, Robert L. Spalding 1872 to 1895, as a gift to the inhabitants of Athens Township.

The cost of the construction at that time was close to $25,000. Mr. Spalding was born in Bradford County, PA and educated at the Athens Academy. The Academy was located on the lot across the street from the library on South Main Street. He became a very successful lumberman and businessman in Chicago, IL. On March 12, 1897, it was announced that Mr. Spalding had promised to erect a fireproof building for the use of the Tioga Point Historical Society and also for a public library. On August 11, 1897, the cornerstone was laid and on June 8, 1898, the completed building was formally dedicated.

The building stands on a narrow strip of land between the Susquehanna and Chemung Rivers which was part of the Alonquin Indian territory. It also was the location of the fort built by General Sullivan during his campaign against the western Indians in 1779.

The building is a stately looking brick structure with antique stone trimmings. It is “of the colonial style of architecture and has a handsome portico supported by four magnificent Ionic Columns. A. H. Kipp of Wilkes-Barre was the architect.”

Thirty years later, on March 1, 1928, the building reopened after a new addition and thorough repairs were completed. The Spalding heirs gave the money for the addition and renovation with the stipulation that the town take over the maintenance of the building. To do that, there was a special election in Athens in April 1927 to enact a 1 mill tax, thus funding their responsibility for the library.

A few years later, Mrs. Jesse Spalding Langdon bequeathed $50,000 to the library in the form of a blind trust. The income from the trust was to go for the support of the library and continues today.

On September 11, 1999, the Lina Burns Elevator Tower was dedicated. The elevator provides handicapped access to the library and museum. Mrs. Burns was a teacher in the Athens School District for many years. She served on the library Board of Trustees for many years and as its president. A bequest from her estate and a Community Development Block Grant made the addition possible.

The building has seen three different centuries. It has undergone many changes and continues to change and adapt as it goes forward into the 21st century.